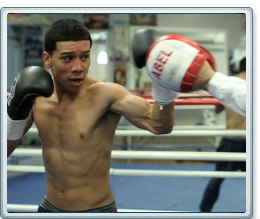 Here’s something new. A press release about a fighter NOT fighting.

Boxing 360, has been informed that a press release sent out by promoter Sterling McPherson of Las Vegas, stating that its fighter, Joel Diaz Jr. (11-0, 10 KOs), will be fighting on November 17th at the Edgewater Casino Resort in Laughlin, NV, against Robert Osiobe, 13-5-0 (6 KO’s) is false information.

“I have no idea who Sterling McPherson is and the fact that he’s putting out a press release regarding my fighter Joel Diaz Jr. is against the law.” said Boxing 360 promoter Mario Yagobi. “I have my legal team ready to move forward if this press release is not rebutted.  I’ve never once spoken to McPherson in my life, let along given him or anyone from his promotional team the right to promote Joel Diaz Jr.”

“I’ve never been approached by anyone from McPherson’s company in regards to them promoting Joel, so I have no knowledge of this fight,” stated Mike Criscio who manages Joel Diaz Jr. “Mario Yagobi and I have talked and we want to put a stop to this false information that has been made public.  Joel Diaz is not fighting on November 17.”