Contender Emmanuel Lucero has stepped in to face unbeaten rising star Joel Diaz Saturday, June 2 at the Emerald Queen Casino as part of Halquist Productions’ “Battle at the Boat 87” card in Tacoma, WA.
A former world title challenger, Lucero made national headlines in 2003 when he faced boxing legend Manny Pacquiao for the IBF super bantamweight championship on HBO. Lucero, a gutsy fighter with a never-say-die attitude, fought his heart out but the Filipino icon stopped him in the third round. Aside from Pacquiao, then 36-2-1, Lucero, 26-10-1 (14 KO’s), faced a who’s who of pugilists. 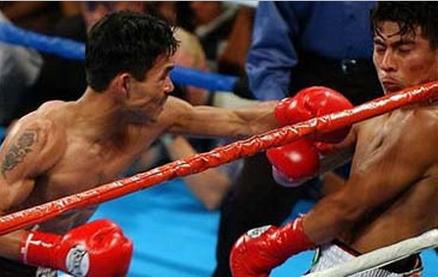 The Scranton, PA based Mexican also holds impressive wins over former world champion Juan Polo Perez and contenders Frankie Archuleta, Rogers Mtagwa and Alvin Brown.
“These kinds of things happen in boxing,” promoter Brian Halquist said of the withdrawal. “Sometimes the replacement fight ends up being much better; and that is certainly the case in this situation. I’m glad we were able to get a suitable replacement and one that has a reputation for making great fights. Plus he has fought the best fighter on the planet, not to mention everybody and anybody along the way. I thank Emmanuel Lucero for his willingness to take on a bright young star like Joel Diaz on short notice. This has the making of one of the best fights we have had in a long while.”
Lucero and Palmdale, CA’s Diaz, meet in the ten round main event.
Appearing in separate undercard bouts are crowd favorites Nate Serrano, Sarah Pucek, Marcellno Pindeda, Josh Hewson and Jesus Partida.
Tickets from $25 are on sale at all Ticketmaster outlets or by visiting the EQC box office.
Doors open at 6 pm and the opening bell is scheduled for 7.
During the last 23 years, Halquist Productions built a reputation in the boxing world for their loyalty, honesty and integrity. In 1997, Halquist Productions ran their inaugural “Battle at the Boat” series, which remains successful to this day. Halquist Productions promoted many world title bouts and their fight cards have been seen on ESPN, HBO and Showtime.