If you haven’t seen Amanda work, you are missing out.

When asked about fighting Nunez for the fourth time, Serrano, a native of Brooklyn, New York stated, “It’s going to be fun, I love Ela, she’s a great person and a great fighter.  She’s always a tough fight and I know she’s in good shape because she just fought a week and a half ago.  I’m stronger than the last time I fought her and I’m always progressing when we fight each other.  This will be a great fight for the fans.” 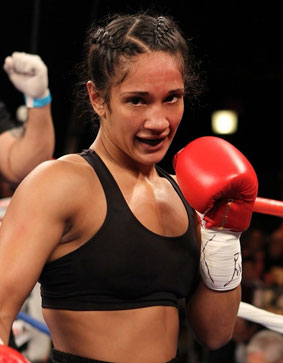 Jordan Maldonado, who trains Serrano added, “Ela is a very tough and cagey fighter.  She’s always coming with a different style and we have a lot of respect for her.  Once we knew we were fighting her again, we stepped up our training, because we know she has something to prove against Amanda.  Nunez is always dangerous and I know this fight will be the best fight of the night.  Amanda is ready to go.”