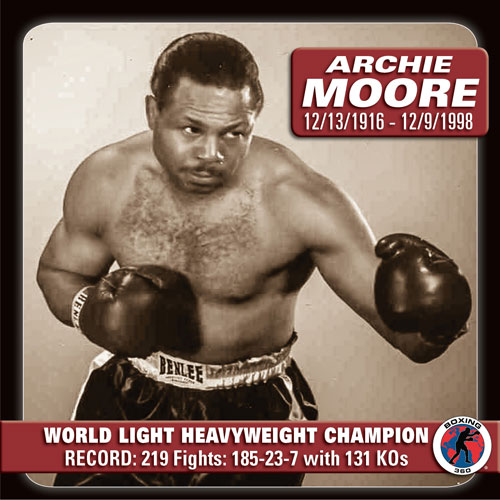 This was Moore’s first title defense in almost a year, the fight lacked any action for nine rounds, both boxers were warned they could be simultaneously disqualified. Moore responded with a burst in the 10th, knocking down his fatigued foe three times before the referee stopped the fight.

Harringay Arena, Harringay, London, United Kingdom, World Light Heavyweight Title. “Moore let Pompey do most of the work in the early rounds and the Trinidad fighter was ahead on points at the end of the eighth. Then came the ninth and Moore pounded Pompey with crushing rights and left hooks. Blood spurted from a deep cut over Pompey’s left eye. In the 10th, Moore went in for the kill. He sent Pompey down for counts of eight, nine and eight before Referee Jack Hart stopped the slaughter.” (Associated Press)

Light Heavyweight World Champion (December, 1952–May, 1962). Moore holds the record for the most career knockouts (131). He ranks #4 on The Ring’s list of “100 greatest punchers of all time,” has the longest reign in Light Heavyweight history, and is rated by prominent boxing website BoxRec as the greatest pound-for-pound boxer of all-time.

At one point, the oldest boxer to win the World’s Light Heavyweight Championship, he is believed to have been the only boxer who boxed professionally in the eras of Joe Louis, Rocky Marciano and Muhammad Ali.

He is one of only a handful of boxers whose careers spanned four decades; his final record was an extraordinary 185 wins, 23 losses, 7 draws, with 131 official knockouts.

Archibald Lee Wright was born on Dec. 13, 1913, in Benoit, Mississippi (according to Moore’s mother and Ring magazine). Or maybe Dec. 13, 1916 in Collinsville, Ill. (according to Moore). Asked why there was so much doubt about his age, Moore said, “I’ve given this a lot of thought, and I’ve decided that I must have been three when I was born.” He was an American professional boxer, who had one of the longest professional careers in the history of the sport. Nicknamed “The Old Mongoose.”

Consider that he made his professional debut during the Depression, got his first title shot just as television was coming into American homes and did not finish his career until the start of Beatle-mania.

Asked the secret to his success, he only offered two pieces of advice: “always exercise the mind and never keep track of time.”

After retiring as a fighter, Moore pursued a career in show business while living in San Diego. But he did not drift far from boxing, serving as a trainer and manager. He was George Foreman’s advisor and cornerman when he took the heavyweight championship from Joe Frazier in 1973. Three years later, he served as the coach of the Nigerian boxing team at the Olympics.

Moore had seven children and was married five times. His last marriage was to Joan Hardy, a New York model, in 1956. They were still together 42 years later when he died on Dec. 9, 1998, at a hospice in San Diego after a lengthy illness.

1958 Boxing Writers Association of America Fighter of the Year.

Voted “Light Heavyweight Fighter of the Century” by The Associated Press in 1999.

The Ring Magazine ranked Moore as the second greatest light heavyweight of all-time in 2002.

The Ring Magazine ranked Moore fourteenth on the 2002 listThe 80 Best Fighters of the Last 80 Years.

The Ring Magazine ranked Moore fourth on the 2003 list The 100 Greatest Punchers of All-Time!