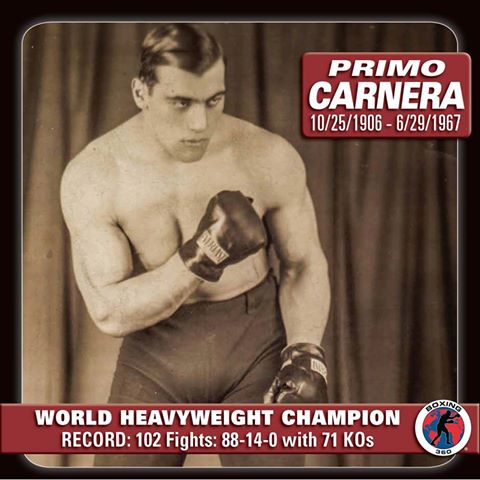 Sharkey mysteriously falls forward after being “struck” by a grazing uppercut.

On June 29, 1933, before a crowd of 40,000 people at Madison Square Garden in New York. In the sixth round, a right uppercut from the challenger that Sharkey never saw coming ended the fight. Stripped of his senses, Sharkey seemed to lift off of his feet before tumbling to the mat. The Carnera victory to become a tremendous upset, one of the biggest in boxing of the decade. Many speculated that Sharkey had been paid to take a dive. Though Jack denied this to his dying day, his own wife admitted her suspicions.

The surface story most commonly recited about Carnera is that he was a freakishly big and unbelievably naive Italian circus performer discovered and exploited by New York mobsters who fixed fights for him and protected him into the heavyweight championship. In the end, the gangsters abandoned him, stripped him of his cash, and let him disappear back into anonymity. Ironically, most of the classic story is true, only in a much less simple manner. Carnera seems to have been an intelligent man, entirely aware that he was being exploited by less than savory business partners, but happy to return the favor by getting as much from them as he could while he could. Culturally and historically, Carnera is important for being one of the heavyweights who helped keep the sport alive after the retirement of Jack Dempsey and during the bleak trials of the Great Depression. He proved to be a thrilling curiosity for the public who set attendance records just to see him flatten overmatched local pugs. In this way he reflected the circumstances and outlook of the world during the Great Depression and the second World War.

June 29, 1933: Primo Carnera knocks out Jack Sharkey in the 6th round to win the World Heavyweight Title! Full fight footage!