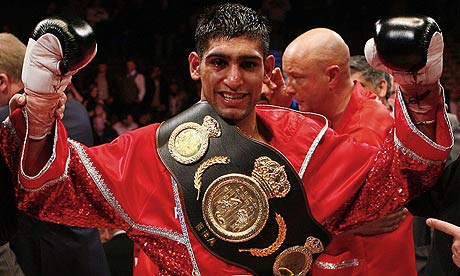 I’m wondering if the Amir Khan to the United States experiment is over. I know he is still with Golden Boy and all but the fact that he has gone back to the UK to fight Paul McKloskey tells me Khan is tired of fighting for smaller crowds out here.

The Khan to the US experiment didn’t fail but he didn’t exactly capture the public’s imagination like Oscar De La Hoya.

Maybe it’s a racial thing. Is America ready for a dark guy with a British accent? I don’t think so. Not as a crossover star. They still think after 9/11 “Is this guy an arab or what?” people just don’t know. It’s sad, really. But some people even say that is what Naseem Hamed never came back but the one time after he lost to Barrera. It’s hard to forget or accept a guy who said Allah every other word in his post-fight interview.

Not a tough guy like he is a going to be hard to beat. But tough as in he can take a lot of punishment and keep coming. This one will go a few rounds. Even a decision I think.

In any case, when it comes time this summer for Khan vs. Bradley, and Khan gets a taste of what it used to be like in the UK when he fighting for Frank Warren in front of packed houses of 20,000 or more, will he want to go back to the US where he sells half or less the tickets? I wouldn’t. Even if HBO decided to show it.

Let’s be honest, Tim Bradley is not a draw anywhere in the world. I think Khan/Bradley should be in the UK. On Khan’s name alone they sell more tickets than a neutral site like The Silver Dome.

What do you think? Should Khan fight in the UK exclusively? Where should Bradley vs. Khan be?