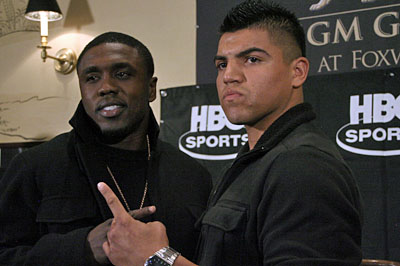 Berto/Ortiz is the poster child for modern boxing. Two guys, one with a belt, one who lost the first time he tried to get one, who have not defined themselves as the best of the best and have barely looked like they wanted to, fighting each other in Atlantic City far away from where each of them has a remote chance of selling a ticket. On HBO.

Granted, I’d love to be the manager/promoter/entourage or even the fighter in that situation. Don’t get me wrong. But as a hardcore boxing fan, I have to smh.

The best thing I can say  about this fight is someone is getting knocked out. So does it matter if Berto is fighting his third junior welterweight in five welterweight title defenses?

If this was 198-Something, sure. Duran fought a ton of times at welterweight before he fought for the title against Leonard. It wasn’t like he wasn’t a lightweight champ coming up that no one knew about. But he built to that fight.

This? I’m not sure what to make of it except to say they’ve both been on HBO a bunch. neither has really instilled any passion in me whatsoever. Maybe together they can.

Is this the beginning of the twenty seven years old Berto’s prime? Has he really gotten to 27 years, five title defenses, and no signature win or single fight that made me care? That’s amazing. How many fighters get to where he is and inspire a general sigh in boxing fans?

I ask fact or fiction because this fight makes me wonder if we are seeing two young lions or two frauds who, well, the loser at least, are being cashed out of the HBO system. That’s generally what happens when two guys fill the same job at a a corporation and one guy is not pulling his weight at the same time budget cuts are coming up.

Are these the best the 147 pounders have to offer?

Or this the best we could find?

Does it even matter? A fight is a fight. two fast fighters, one southpaw, one orthodox, with power and bad chins. Sounds like a fight to me. And one with an explosive ending. Count me in.

I got Berto in 7. Victor can run fast and he will once he tastes the power of, wow I can’t believe I am saying this, Berto.

What do you think? Is this a good fight or more of the same?